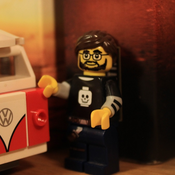 The year 2117. Berlin is one of the first cities to have a space port. Do you want to travel from there into orbit or to another set of city platforms? Be sure to use our Berlin public transport system. Our two deck repulsor engine shuttle busses await your demands. Feel like discovering some new star system? Our bus service will get you to a big space cruiser safe, fast and adequately priced

The design of this bus is relatively close to existing bus models that currently roam the streets of Berlin. Every ten minutes it would pass outside my window twice. The stickers on the model describe a certain Berlin bus line stopping right infront of my door that i use since i can remember

The model comes with six minifigures: A bus driver, two alien passengers and three human passengers. Every deck of the bus is accessible and highly playable because it is easy to take apart and put together again (exception: the doors do not open so far). The inside features five seats on the lower and fourteen seats on the upper deck as well as room for a wheelchair or a toddlers carriage. It has yellow bars to hold on inside and a fleshed out drivers seat turned into a cockpit. It has one set of stairs behind the drivers seat that wind round like in reality. Actually the original features a second set of stairs in the back but that is where they installed the repulsor technology

The bus is a little tricky to assemble because of different interlocking technique but it should be an entertaining build. Once it is completely build up it is very stable and perfect to play and jump around with. It could also be a wonderful asset for afols collecting spacecraft or builders of huge Lego cities - it's easily possible to build a more current version on wheels

Please support my project and leave some intel if you like it. You can also visit my flickr channel to see more awesome spacecraft in dystopian Berlin of the future. Also make shure to take a look at my other project - The Potacs, Berlins police craft of 2117