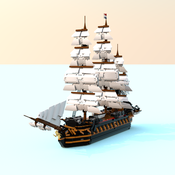 This is my Lego design of HMS Surprise, (a British frigate that was commissioned in 1794).  I believe that this model would make a perfect new UCS set to succeed the Imperial Flagship set and add to the fleet of ships already produced by Lego.

On the upper deck there are 2 bow chaser cannons and 2 more cannons aft (which can be positioned on either side of the ship) thus allowing the crew to chase down the Kings enemies or fight yard arm to yard arm in a close quarter engagement.  With the addition of a small jolly boat over the main hold, the Captain can also set out on mini expeditions to land on undiscovered shores, discover new species or even to abandon his ship, should it be overwhelmed by a greater enemy force!

On the quarter deck you'll often find the Captain pacing up and down giving orders to "make more sail" or "beat to quarters" as he commands his ship through treacherous seas or enemy territories.  There are also an additional 2 placements for cannons, to help sink any lurking pirates, and the wheel to help steer the ship (with a moving rudder).

The gun deck houses 4 cannons for an unprecedented broadside against enemy ships, towards the bow of the ship is the brig and stores (with extra cutlasses and muskets for boarding foreign ships alongside). Slightly aft is the ships galley where the crew can reenergise after a hard days work as the cook serves up salt pork or ships biscuit (usually infested with weevils!). Further aft is the mess / gun placements (where the crew both relax and fire the 4 cannons).

The Captain’s cabin is very spacious, and contains an excellent 180 degree view of the sea right to the horizon.  Within it there is a desk and chair where the Captain can plot his course, (on top are his secret orders and vials of medicine for his crew), a globe, stand for his wig / hat, and a small diorama for fleet movements.

The model contains a total of 2806 bricks, including HMS Surprise, 7 minifigures (Post Captain, 1st Lieutenant, 2 Marines and 3 able hands), and a micro scale version of the ship.

I hope you enjoyed my design of HMS Surprise as much as I enjoyed designing and building it and hopefully it might even be an official Lego product!!