Futurama: Welcome to the Year 3000 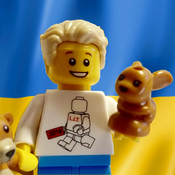 Celebrating 21 years, 5 months and 24 days of the groundbreaking SciFi show Futurama, I bring you this attractive commemorative display, featuring BrickHeadz figures of the three main characters and a backdrop comprised of some of the most iconic elements of the show.

The big screen is the most striking part of the show's title sequence with the Futurama sign and a funny message which was different for each episode.

In this model, the big 8x16 tile that makes up the screen is decorated with a sticker depicting the show's title screen.

Included in the set are three more tiles and stickers: an ad for Slurm, the galaxy's leading soft drink, an ad for the Planet Express company, and a public service announcement by the Hypnotoad.

The back of the screen has an opening which allows you to push out the installed tile for easy replacement.

The unused tiles can be stored in a stand at the back of the display.

Next to the screen is a micro-build representation of the Planet Express ship about to crash into the big screen, just like in the title sequence of the show. The ship is mounted on a ball joint, so that it's position can be adjusted to your liking.

The backdrop is completed by a Bricksketch style 2-1/2-D representation of the iconic Planet Express headquarters.

The front part of the display consists of a row of mounts for the included BrickHeadz of the three Futurama main characters: Philip J. Fry, Turanga Leela and Bender Bending Rodríguez. Each BrickHeadz' stand is mounted on a small turntable, so that every figure can be posed individually.

This attractive tribute to Futurama would look good on any fan's desk.

Edit: I was finally able to build my model for real, and I added the pictures of my physical build.
I did some minor alterations, mainly colour and parts replacements due to unavailability of some elements in the colour I used for the digital design. This is most notable in the Planet Express ship, because some of the slope and wedge pieces I used do not come in the green colour (yet).
I also changed the design for the Bender BrickHeadz, because I think the new one just looks better. If you'd like to see a comparison to the old design, please check out the updates section.