Bag End from The Lord of the Rings and The Hobbit (REVISED!!) 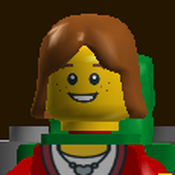 By kwilder
1 comment
Hello Folks, I am aware that LEGO has made and sold a Bag End set (I even have it, it's lovely). I made this project before the set was announced, so it was not my intention to duplicate. Thank you to those who have supported this. Given the time it took me to make the project and that people have courteously voted for it I wouldn't want to pull it down, but I understand entirely that this set has already been made.

I am so excited for the new Lord of the Rings and The Hobbit sets from Lego. Among the anticipated sets, I did not see "Bag End" the home of Bilbo and later Frodo which is featured in both The Hobbit and the LOTR trilogy. This is my interpretation of Bag End, designed with Lego Digital Designer. As this set is featured in all of the books, this set would have versatility as far as when it could be released and with what other additional companion sets.

This set features four mini-figures, Bilbo Baggins, Frodo Baggins, Samwise Gamgee, and Gandalf the Grey. The number of pieces included in the set is 400. I would estimate, based on current pricing of the 2012 Lego sets that are licensed brands and of similar size, that this set would be somewhere in the $50-$60 range.

I designed this set using Lego Digital Designer as I don't have many of the pieces of my own. Therefore the pieces included are limited by what is there in the program, so a finished and final product would likely be able to include other features and potentially fewer bricks (potentially decreasing the price). You will notice that the mini-figures do not have the ideal details of the images released by Lego thus far. Of course, I would hope that if this set is released, the mini-figures would be detailed and allow for good distinction between these iconic characters.

Please note: this is my own creation, I just used my own memory and some reference images from the movie to make this set. However, due to the constraints of Lego and my own desire that this set not become overly massive, it is not as wonderfully detailed as the real Bag End. If this set should somehow overlap to other brick renderings of this set, that is purely coincidental. I have never seen this set rendered in Lego or any other (inferior) product like megablok. But, given how awesome Bag End is, some others may have tried. As I have not ever seen anything similar, this set is my own unique creation.

I hope you enjoy!

Updated 2/20/12 2:00 pm EST: I updated this set to be somewhat more compact, greatly reducing the number of pieces while also allowing me to add additional interior details. I also revised the facing so that the green "hill" portions seems a little more organic and less visually overwhelming. The description of the set included in this text and captions reflects the current information on the set.

Rear view of the Bag End set. From this view you can see the three main rooms that comprise the set, to the left a dining space, the middle is the entry way, and the right is the study. You will notice that just like the Bag End of the movies and books, this set features walls with circle doorways to pass through. A fireplace is at each end of the house. You can also see my (crude) renderings of the mini-figures: Frodo and Sam are in the center entry way, Bilbo and Gandalf are in the right most room.

Focusing on the center, you will notice a map on the left side of the wall, as well as a barrel underneath it (just visible). On the right is a small drawer with a gold knob. The door is fully able to move open and closed. In the entry, Frodo is about ready to go for a walk with a tasty apple, and gardener Sam is going to plant some flowers! 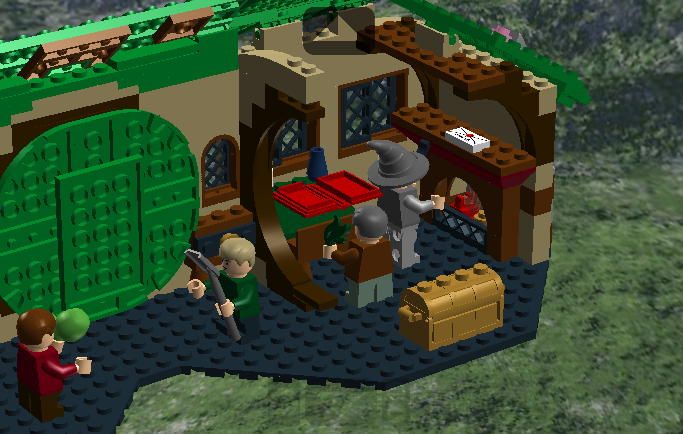 This photo depicts extra detail of the study. Half the circle dividing the room has been removed to allow better visual of the space. You can see the fireplace (the fireplace has flames, but they are mostly obscured) with the ring of power in it, and Gandalf is about to remove the ring with his fire tongs. You can also see Bilbo working on his "Red Book" at his desk (this picture shows a revised version of the desk which is better sized to Hobbits. The mantle also holds the envelop where the ring of Power was once stored. There is also a gold chest to hold some of Bilbo's treasures from his earlier adventures.

Also, looking at the entry way, you have a somewhat (but not greatly) improved view of the small drawer next to the door. You can also see all four mini-figures, though ideally the released version of this set would have more min-figure detail. 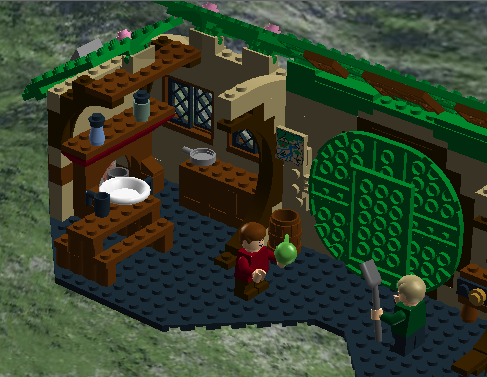 This photo depicts extra detail of the dining area. Again, the half circle dividing the room has been removed to allow better visual of the space. You can see the fireplace (there are flames, but they are mostly obscured), but this one is larger to allow for cooking (a pot is there ready for second breakfast). On the table is a large dish and mug. To the right of the dining space is some storage with crates and a cover; on top of the storage is an extra pan. Underneath that cover, some food could be stored in the crates (though probably only enough for a small meal for one hobbit. The dining area also features a small hobbit sized table and on the mantle are some canisters for seasoning the meal. You can imagine that this room could be bursting with Dwarves such as occurs in the early portion of The Hobbit 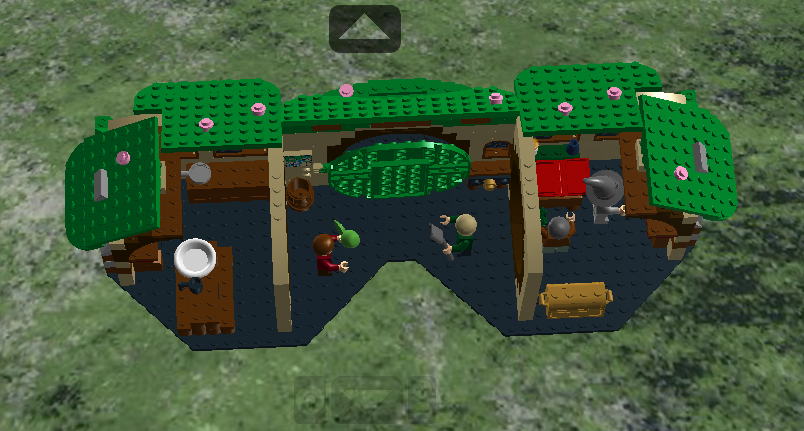 This is the top of the Bag end set, it shows the rough size, as well as how the roof is structured. All of the roof pieces are on hinges to better facilitate play. Notice, this picture shows the set as more compact than the first version I made. This set has only 400 pieces, which would make it much more affordable. However, even with the decreased interior space and number of pieces, you can see that the set still has space for interior play.