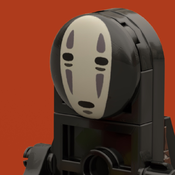 “Haku! Thank goodness, you’re alive!”
With your help there could be a real Studio Ghibli Lego set! Please vote by clicking ‘support’.
Reprise enchanting scenes from Spirited Away with this model of Haku in dragon form! Includes 3 minifigs: Chihiro, Haku, and No-face as well as a display stand based on the bridge to the bathhouse.
For almost two decades, ‘Spirited Away’ has been considered the crowning achievement of Japanese animation house Studio Ghibli. While moving house, 10-year-old Chihiro Ogino and her parents find themselves in the spirit word when taking a shortcut through a tunnel. When her parents are turned into pigs by the witch Yubaba for eating food reserved for the spirits, Chihiro is left on her own. Taking the name Sen and working in Yubaba’s bathhouse, she must learn to stand up for herself and help others if she is to return to her world, and save her parents.
From writer/director Hayao Miyazaki, this film attained critical acclaim and box office success when it was released in Japan in 2001. It is regarded as one of the greatest films not just in the animated medium, but in general too.
The beauty and imagination of Spirited Away, with its many weird and wonderful spirits and creatures inspired me to create a model of one of the most elegant - Haku. As Yubaba’s apprentice, Haku is her henchman, unable to return home as his name was taken from him. When the bond between him and Chihiro grows, she feels as she remembers something important in her past about Haku.
Haku takes the form of a dragon, and I have recreated this elegant form with white body, teal fur and lavender underbelly. The model features numerous posable points along its winding body including its leg joints. Details on the head include whiskers, ears, horns and eyes.
Haku comes in the set in minifig form too, along with Chihiro and No-face, the monster fed by greed who plagues the bathhouse after Chihiro invites him in. No-face comes with a replacement torso with extending arms, and a piece of gold and an herbal wash token are included for him to offer, to recreate iconic moments. The minifigs can be displayed on a stand, which is based off the bridge leading to the bathhouse, it is where Chihiro first meets Haku and No-face. There are three extra teal pieces that replace the fur behind Haku’s head so that Chihiro can be placed on top, to recreate the the scene where Haku flies her back to the bathhouse.
I believe this would make a great set as not only a detailed model of an eastern-style dragon but also the first Lego model of one of Miyazaki’s creations to commemorate the 20th anniversary of this movie that has captured the imaginations of so many.
Please click support for the chance of a Lego recreation of an amazing piece of the world of Ghibli!
“Once you’ve met someone you never really forget them. It just takes a while for your memories to return.”