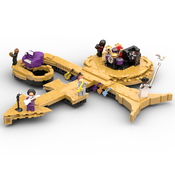 Prince. Innovator, cultural icon, and uncompromising pioneer of musical freedom and creativity, Prince sold over 100 million albums worldwide in his 39-year career. Perhaps no single person defines music as much as this first-ballot Rock n' Roll Hall of Fame inductee. Incomparable singer and multi-instrumentalist in the studio, the phrase "produced, arranged, composed and performed by Prince" appeared on 39 ground-breaking albums during his lifetime, including Purple Rain, 1999, Diamonds And Pearls, Musicology and many more. At the same time, he contributed songwriting and musical performances - often uncredited - to dozens of albums by other artists. But Prince was also a live act like no other. With bands including the Revolution, the New Power Generation, and 3rdEyeGirl, Prince toured worldwide from 1979-2016, playing intense high energy arena shows, often followed by lengthy spontaneous small club 'aftershows.'
Ever an uncompromising visionary, Prince used an unpronounceable symbol as an album title in 1992 before taking it as his own name from 1993-2000. The symbol became as synonymous with Prince as the swoosh is with Nike. A Prince symbol LEGO set will allow fans around the world to honor the music and legacy of Prince while finding inspiration and drive for their own creative passions.
This set represents three forms of Prince's symbol, affording a multitude of display and play opportunities:
The symbol is synonymous with Prince and his inspiration of others. Get inspired to find your own muse and explore your own creativity with the Prince Symbol 3-in-1 set! After all, what could better symbolize music in a LEGO form?
*Please note that Prince's hair and clothing styles changed regularly, and there are several iconic looks that could be used in this set, including the Afro hairstyle that bookended his career; additional hairpieces and/or torsos could be included in the set to represent different eras.