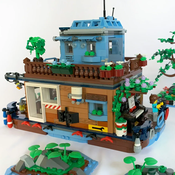 We love Charlie, Nick and their friends!
The characters from the television series who have touched our heart are now always with us!
Charlie is one of the main characters, and I created his room along with Nick from the entertaining television series “Heartstopper”, an interpretation of the Alice Oseman opera presented on Netflix. Charlie's haven
There's Charlie's usual unmade bed (illuminated by the neon sign "Music"), where he exchanges messages with friends via Instagram. Charlie loves music. He often listens to it, and he keeps beside his bed vinyl records and a record player, his headphones, and the cute mini mirror balls which he turns on when his friends are there (he turns on the dinasaur too!). Playing music is expressing oneself
Not only does Charlie listen to music, but he's also a musician! I've reconstructed his drum set, in which he expresses his different moods. The drums which are sitting in front of he will take Nick's hands in his own. Write, draw... dream!
Then there's a space where one finds the drawers and his desk, containing pens, coloured pencils, memories, and objects that he loves. He uses them to draw, write and study... and he sometimes does his homework on the rug… especially if he's with Nick! Charlie and Nick
I wanted to recreate an environment and atmosphere full of emotions from Charlie's room. It's one of the places where some of the sweetest, most intense and touching scenes where shot along with Nick.
Nick: "I told we're together" Charlie and his friend
Charlie's room is also the place where Charlie shares emotions with his insightful and sensitive friends. But here they play together too! Here's the moment immediatly before the Isaac's "Oh, whoops" funny moment!
Tao: "You have more money 'cause you know the Monopoly cheats"
Charlie: "You can't cheat at Monopoly!" Why I created this set
Heartstopper has warmed my heart with goodness, sweetness, generosity of friendships and love from all the main characters.
I've analysed the scene on the television series, the pictures in the comic strip, behind the scenes footage, and interviews with those in charge. I read that Maxwell Fine, the set decorator of the serie, said Charlie's room wanted to be messy, but also had to have a sense of ownership, with layers and layers of life collected as he'd grown up; and maybe, the way Charlie embraces his sexuality is a direct result of him being so creatively curios in life. So I've recreated Charlie's Room with love and passion using bricks… and it shows his design, decorative objects, posters and... the creative chaos!
Heartstopper is a gift for adolescents, the young, adults from all over the world. It brings into the homes of millions of people the emotions and feelings of two boys and their friends with simplicity and realism, showing clearly how friendships and love are emotions that bond human beings regardless of their identity or orientation.
I think it would be great as well as important for adolescents to receive and have in their bedroom Charlie's Room created by a company that is inclusive like Lego! Perhaps to have beside the set "Everyone is awesome"…
Sincerely thanks to all the Lego and Heartstopper fans for they support of this project.