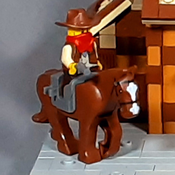 By master the brick
47 comments
The wild west was won by brave pioneers and settled by men and women who sought new opportunities. As towns grew, people needed a faster way to move there. Thus, the Trans-Continental Rail Road came into existence. Each bustling town along the rail road had a train station, where people and supplies would be transported, thus helping western towns grow.
Any Lego set depicting the Old West needs a train station, then, as more ideas for old west buildings come out (a Saloon, Hotel, General Store, Sheriff's office, etc.), they can be added as compliments to this incredible train station.

By master the brick
47 comments