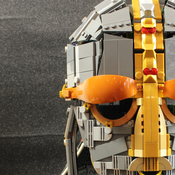 Real history, made from LEGO
The year is 625 and the medieval King Rædwald of East Anglia, England, has died. Buried with him is his magnificent helmet. Not only was his helmet a piece of battle armour, but it also served as his crown. 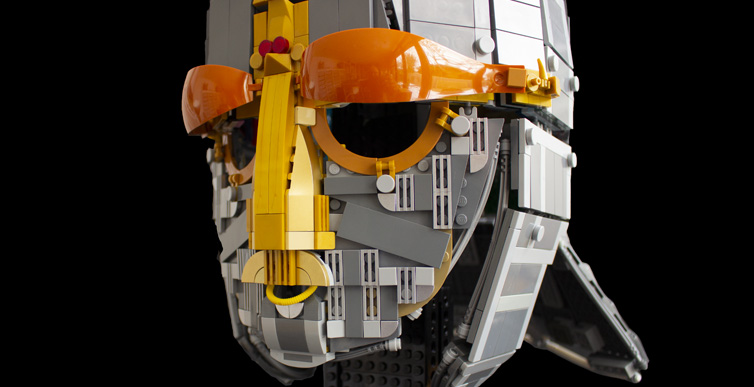 The Sutton Hoo helmet is an object that draws cultural inspiration and narrative from across the peoples and countries of Europe; from Scandinavia to Italy, in a time we used to call ‘The Dark Ages’ – they were anything but.
The helmet is one of the most spectacular Anglo Saxon archaeological discoveries ever made. The original would have glistened in metallic silver and gold, inset with transparent red garnet gems.
Is it wearable?
The build uses a combination of plates and tiles held together with mixel ball joints, locking hinges and bar and clips. Gaps are filled using wing pieces. Technically it’s wearable, but it is intended more as a display piece. Though having read the history and worn it I can say there’s something rather magical about putting it on and imagining yourself as an Anglo Saxon king – it’s very powerful! 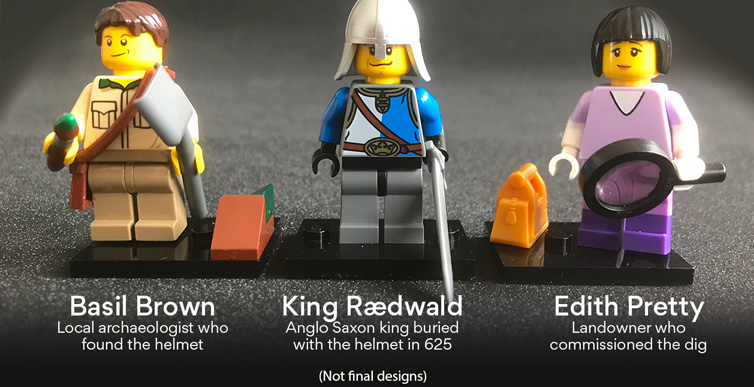 My build suggestion also comes with three mini-figures; King Rædwald himself along with his helmet, sword, spear and shield. Archaeologist Basil Brown, who originally unearthed the helmet, and Edith Petty, the landowner who commissioned Brown to undertake the work and donated her priceless finds to the British Museum.
New colours and new pieces
The build uses existing pieces which, should the project go into production, might come in new colours. The eyebrow pieces (made from LEGO balloon segments) would be pearl or metallic gold printed with garnet gems. As would the wide macaroni pieces (27507) used for the under eyes. The flex axle trims around the face, ear guard and neck protector currently in silver would also be better in gold. The yellow hose that makes up the mouth detail would also need to be available in one of the LEGO gold colours.
Why should I vote for this?
I hope this build appeals to people who love history and culture, but also any LEGO fans worldwide who want an exciting, challenging and intriguing build that they can display.
Find out more
Watch this video on how I made the Sutton Hoo helmet