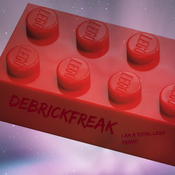 Spectral Fracture Industries International Arboure Class Cruiser - 'Solos One' (SFII 001)
Length - 67cm(82 studs)
Width - 17cm(21 studs)
Height - 18cm(22 studs)
Piece count - 2368 pieces
Hello,
I present to you my idea of what a ship could look like in the future (maybe 100 to 150 years). A craft capable of flight in both space and atmosphere as well as capable of carrying a multitude of smaller craft.
The Superstructure
The superstructure is split into two individual towers with an observational deck in between. The front structure assumes control of the majority of the spacecraft (i.e. the engine power or hangar shutters, life support, etc) The rear structure is responsible for monitoring and maintenance of critical ship features such as power stability as well as ship security.
Engine Power
The engines consist of two quad plasma thrusters with quad support thrusters used for low speed travel and a middle support engine used in emergency manoeuvres. All engines are powered by a twelve turbine plasma reactor which also supplies the ship with all its power. A backup three turbine plasma reactor is available in an emergency. Both reactors are located under the rear superstructure.
X Design
Each cross wing consists of multiple sleeping quarters, a pharmacy, a doctors office and other personal need units.
Front Design
All main decks (i.e. leisure, secondary workspaces, etc) are all located at each 'wing' forward of the hangar. The front section of the ship also holds critical systems such as life support, oxygen supply and the main ventilation systems. Between the front section there is an observational deck looking ahead of the ship.
Middle Section
The middle section, located between the hangar and engine, is where medical Laboratories, food production labs and the R&D centre. Since the ship is designed for long distance travel, it has been implemented with appropriate medical, scientific and agricultural divisions.
The Hangar
The hangar is open from one end to the other rather than being split to be able to accommodate more air/spacecraft. The Hangar connects to the main body of the ship and front section through overhead walkways or direct doors on each side of the bay. The hangar bay also has a dedicated control office in the hanger.
Landing Gear
The landing gear is split in two. The first half are two extendable legs located under the spaceship, where as the second half is located on the lower x section wings which have built in feet for landing.
The build itself also includes three small craft;
> A multi-purpose, two seater jet.
> A quad rotor propelled personnel carrier.
> A prototype plasma propelled personnel carrier.
If you enjoyed this, it would mean a lot if you would support this project. Thank you.