Back to Mars: New Horizons 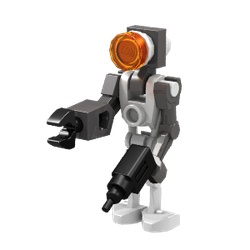 The New Horizons is a capital spacecraft, intended to explore our solar system further as it was ever possible before. The sigma-shaped design is based on a transporter of the Galaxy class for transfers between Earth and Mars which was adapted for deep space missions. Most of its storage capacity is replaced by additional equipment and extended quarters needed by a lager crew to travel beyond all known places in space ever reached by mankind. A special modification of the roof allows it to be use as a flight deck and adds carrier capabilities to the ship. Scouts are carried along with it and used like pathfinders, having a higher agility.

A space craft like this might be capable to travel close to Venus. Or to pass Mars and reach Jupiter in order to refresh the Deuterium storage system of the power plant module. Afterwards it can travel to Saturn in order to have a closer look at its rings and to collect some probes by the help of a space-capsule. This would be the beginning of a completely new chapter in the exploration of our solar system.

Based on the latest technologies developed during the missions to Mars and knowledge collected during its colonization, the New Horizons offers a huge amount of features:

The design of the flight deck allows spacecrafts up to medium size to land on and dock at New Horizons, like the freighter from Phoebus Mining (PM) and the cargo lifter from Mars Outpost. The dimension of the cargo bay and its gate is compatible with the AMV and support vehicle from PM. Also the hangar is huge enough to pick up the foldable base camp from PM.

To enhance the playability, there are normal and hidden ways to access the internals of the carrier:

For sure, the main aspect of the project is a Sci-Fi based spacecraft. But I can image to include some illustrations of the solar system, showing the size and distance from Earth of other planets, embedded in a comic explaining some facts in a more "brickish"-like way. A similar thing would be possible to present the technique behind the cold-fusion power plant which is already in development for several years. At least also the microwaves emitting Cannae Drive is based on latest research activities: regardless how strange this sounds today, it might become reality in the nearer future. Isn't this the renowned way of "learning by doing"?

To improve the look of New Horizons while it's kept in a cabinet, the model can by extended with 2-3 pairs of 8870 LED lights and a 8878 rechargeable battery. The battery pack fits in the room below the crow's nest. The 1st pair of lights can be used to illuminate the conning bridge and the laboratory. The 2nd pair can be used for the crow'S nest and the hangar. A 3rd pair might be used at the rear between the 3 drives. This should create a nice glowing effect during the evening.

We are asked not to use an unlimited number of parts, so the goal was to keep the number below the Sandcrawler (~300 €). It has got ~3300 and the spacecraft uses 10% lesser. With ~2950 parts the price might end up at around 269 € in respect to the one of the Sandcrawler. With some more optimizations it could be reduced to probably 259 €. This is by far not cheap, but in comparison to the offered features it sounds reasonable.

Nevertheless I would like to also discuss an alternative marketing strategy: Perhaps it would be possible to exclude one of the scouts and to create a "promotional pack" out of it. The pack might contain the needed parts and a building instruction combined with a comic showing the start of the scout from Earth, passing the Moon and landing on New Horizons to introduce and advertise the ship. In this way the price can be reduced to 249 €, but allowing us to buy a 2nd or 3rd scout.

Additionally we should discuss if the roving vehicle should be contained or completely be replaced by the space-capsule, because this would keep the flight deck clean and save additionally 10 Euro which might result in a price of around 239 €. If the carrier become a successful product, the roving vehicle could be introduced later on in a similar way like the promotional pack for the scout. What do you think?

Final Words
Comments are welcome and you are invited to discuss further enhancements and ideas.

If you like the idea, please feel free to support this project. Thank you!