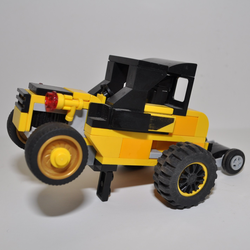 lego car guy
25
Niagara Falls is one of the most well-known landmarks in North America. It is located on the border between Ontario, Canada and New York, United States. Niagara Falls is actually made up of three different waterfalls: Horseshoe Falls, American Falls and Bridal Veil Falls. In my Lego creation, I was only able to build Bridal Veil Falls. For the rocks in my build, I used mostly sloped pieces, bricks, bricks with side studs and headlight bricks. For the waterfall itself, I used mostly sloped and curved pieces, tiles, some 1x1 round plates and bricks and some 1x2 bricks. For the structure of the waterfall, as you can see in the picture, I used those cavern walls pieces that you can attach bricks onto( I don't really know how to describe them). I think this would be a great Lego set for those people who like sets with lots of sloped, curved and textured pieces. It could also be a great souvenir or remembrance for someone who has been to Niagara Falls. Anyway, I hope you like my model of Bridal Veil Falls and please support it. Thank you!
25