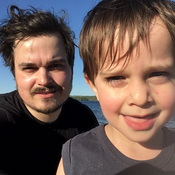 Egypt is a land of mysteries. The ruins that exist today can hide many secrets and treasures. The giant 60-feet-high statues, known as Colossi of Memnon, were built to protect the entrance to the necropolis in Thebes. Little do archaeologists and historians know that one of the colossi is the very tomb of Pharaoh Amenhotep. It was built to preserve Pharaoh's body and his gold, protecting them from explorers, thieves and looters.

On the right side of the base, when moving the bush forward, a secret compartment is opened, from which the most dangerous black scorpions of the desert come out ready to attack. The sting is fatal!
During the flood season, you can access the big statue using small boats or rafts … but be careful! Crocodiles are lurking under the waters of the Nile, or disguised among the rocks at the base of the colossus; they are dangerous, treacherous, and, of course, hungry!
On the right side, near the palm tree, there are some hieroglyphic inscriptions that alert visitors to the imminent danger. Suddenly a revolving wall moves, and the skeleton of an old priest attacks the explorers with a spear. On the left side, a statue of Anubis protects the late Pharaoh's burial chamber. Suddenly a movement happens: the statue of Anubis slides to the right and a pure gold sarcophagus is seen.
Then a loud bang is heard, a great tremor shakes the ancient structure. The rocks start to crumble and a lot of sand dust comes from within the cursed colossus. Everything happens at the same time. The two woman-shaped statues fall down from the colossus legs, between which a large staircase appears, allowing access to the upper part of the colossus. The team of explorers begins to climb the stairs slowly and carefully. But on the way, they are surprised by big golden metal balls, thrown from inside the statue. Finally, when someone reaches the top, the colossus breastplate opens and the great and fearsome pharaoh appears with all his power and fury. He sets the last trap, a false bottom is opened and the invaders are trapped inside the great statue!
Will the explorers survive these pitfalls? What would be the end of this adventure story? Are you also excited to create many more adventures with this awesome LEGO Ideas set?
This LEGO Ideas set has the same proportions as the actual Colossi of Memnon: height of a man = 6 feet x height of the colossus = 60 feet. I used 2444 parts to create this model. I tried to work with the colors as much as possible … and also with a wide variety of pieces format.
I hope you like this idea and one day have fun with this LEGO Ideas set.

Your support will be highly appreciated!