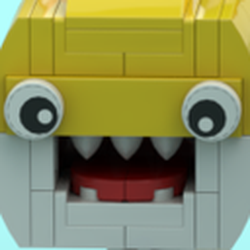 Homer and Marge Simpson in the style of the new BrickHeadz line! BrickHeadz is a new line of collectible sets that brings a new way to collect, build and display iconic characters from movies, TV series, games and comics. When I saw the superhero and Disney character sets that have been released so far, I knew we needed to add the Simpsons.

Homer carries a donut and uranium rod, while Marge has her purse and a frying pan (to cook up some pork chops, or give Homer a much needed whack to the head). Characters are built to the standard Brickheadz size, complete with display stands. Although these models make extensive use of Studs-Not-On-Top (SNOT) design, I thought the exposed studs were a great way to create the look of Marge's iconic hairdo.

Thanks for looking, and please vote if you like the set!