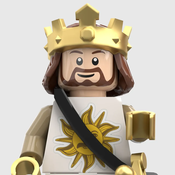 We hit 100 in support (!) which means you all have to stare at my MOC for at least another 420 days! Sorry...
But thank you! The support and kindness of this community has been overwhelming. Lots of good people here making wonderful creations and sharing their love of Lego. I am truly humbled to be able to participate. Thank you!
On to the next milestone! If you're into sharing these things, please consider sharing this project! 1,000 sounds and feels like a lot more than 100. Here's hoping we can get there.
Thanks again and please drop a note! I really enjoy checking out everyone's projects.
On Sep 15, 2021

More details of the interior!

Let's do another update!
I was a little short on minifigs in the initial pictures. The Pizza Café could use a few more patrons and maybe some counter help.
That became a good excuse to show a little more detail on the first floor. From the beginning, I wanted the first floor to have an open space that would give it depth. I really liked the idea of being able to see minifigures sitting at a table as part of the elevation. The arch pieces added to that nicely by offsetting two of them and creating a transition and focus to the inner section. I added a single cup coffee maker because I love coffee (As most people do) and I wanted some functionality on the countertop. From inside the cafe area, we get a better look at the window opening between the cafe and the pizzeria, as well as the chalk board menus that hang in the cafe. I changed the pizzeria style checkerboard tile here to give it a slightly different look, going for less contrast in the colors and using the L shaped tile for a little more variation. I keeps the same idea but gives it's own look. Going over to the restaurant side, we can see the flower ledges in front of the windows, our friends sitting down for lunch, and the Lego Colosseum depicted as a black and white photo above them. The photo in particular is influenced by the pizza places I used to go to in my home town, which always had iconic black and white photos from Little Italy in the early 1900s and from Italy itself. One last detail from the pizza café is the oven. I had originally built the oven for baking but as the idea came more into focus and the pizzeria became what I wanted to do, thankfully the oven adapted pretty easily to a pizza oven. Moving to the second floor, the recording studio. This isn't the clearest shot but I didn't want to remove the window and change the feel of the room. Behind the engineer you can see a couple of gold records. Originally I wanted to keep with the Beatles theme and put Abbey Road on there but realized that probably wasn't a good idea. Instead, I took a minifigure head and did the tried and true faces of the band album cover, similar to Let It Be and countless others. I didn't get to focus too much on the lounge area of the studio in the original pics. This is the reverse angle coming from the door to the live room. At the far end is a poster of our as yet unnamed rock band (if you have any suggestions, I'd love to hear them! Probably brick themed, right? The Bricklayers maybe?). The iconic Beatles lego faces on the left. I really wanted to put a record player in which sits at the end of the couch as yet another piece that needed to be compact. And finally, a water cooler in the little alcove next to the control room door because hydration is important, people! Moving to the third floor, just a few quick looks. First in the patio with its red chaise lounge. You can really drive yourself crazy picking colors for things and I will probably revisit the colors on the third floor eventually, but the red felt nice as a contrast to the subdued earth tone colors of the rest of the floor. I LOVE the lantern pieces Lego has created and wanted to work them in somewhere and outside lights felt like the perfect application. The arch above the doors seemed like a good compliment to the one in the bedroom. which is here! I showed a little more detail on the armoire in the previous update but we never got a good look at the room itself. This was another situation where you realize you can run out of room quickly. I didn't want to the room itself to feel overly congested. I wanted this floor to feel more like a living space and breathe a little compared to the other floors, especially since it would be the most accessible. The basic box bottoms made the perfect night tables with lamps a nice accessory that helps fill the vertical space. I was really happy with how this came out.
Thanks again for reading and your support! If you have any band names, I'm leaning towards The Bricklayers but would love to hear your ideas!
On Sep 13, 2021

I wanted to post a quick update to show some of the details that I didn't have room to post in the main pictures of the third floor. This includes the kitchen and the bedroom. The kitchen was pretty fun to do albeit a little challenging. My biggest hurdle was the refrigerator. I wanted something that had a door but wasn't bulky on the sides that took up too much room. This meant coming up with a way for the walls to attach to the base while still allowing a top. It took a lot of trial and error but I was happy with the results. I used that basis of the fridge to create the armoire but adjusted it a bit, adding a crossbar for hanging clothes. A lot of the building arches and designs also work very well on furniture, giving just a little extra visual interest. I wanted the desk to feel strong, like it was made out of metal and wood so I added the metallic bolts on either side. And finally one of the details from the recording studio that didn't make it into the initial photos: the vocal booth. Can't have a recording studio without a soundproof booth!
When I first decided to make the second floor a recording studio, a million ideas ran through my head: I need to put this in and that in and oh yeah that would be awesome and what about this!
And then you look at the space you have and realize you have to simplify things.
My initial attempts at the piano were much larger and clunkier. I built one and tried to drop it in and realized it took up way too much space. I knew the drums would be space hogs (all drums are) so the piano and the vocal booth needed to be bare minimum.
The booth needed to be compact but large enough to fit a figure and a suspended microphone from the ceiling. That meant coming up with a compact, functional design to hold the mic that still looked authentic. I think think this worked pretty well.