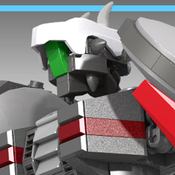 Science fiction meets Lego bricks in the construction of this robot suitable for missions on planets and in space.

The Sidereal Giant is a transformable mecha from android to spaceship with the cockpit placed in the belly of the robot.

It is an original project, born from the passion for the construction of robots created by my imagination and inspired by the mythical anime and manga of my childhood, spent between the 70s and 80s.

I think the Sidereal Giant can be suitable for a set for builders who appreciate science fiction about the universe, to imagine adventures in distant worlds in space and time.

The mecha is made up of 471 bricks and has weapons to defend itself inserted within its body. Gamma rays shot from the chest and machine guns from the elbows.

The thrusters in the wings can be gripped by the robot like revolvers and used to move quickly to hit the opponent.

All the joints of the body are very articulated and allow the typical postures of martial arts.

In addition to the images in detail, you can see a presentation video of Sidereal Giant that shows the transformation and movements of the mech in action! You can connect to this link:

I made an animated guide to the construction of the mecha available at this link: