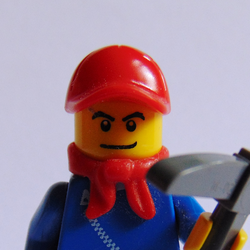 I have always been fascinated by the song and tale of the Lambton Worm. It's a story told in the Northeastern part of England about a young boy who catches a strange worm-like fish in the River Wear. He doesn't know what kind of creature it is and can't be bothered to carry it home, so he throws it down the well. Over the years the worm grows larger and larger and eventually climbs out of the well. What follows is a disaster for the village of Lambton, with the worm savaging cows and sheep and even eating small children. The boy, who had in the meantime grown into a knight and returned from the Crusades, hears about the creature, fights and defeats the evil worm.
This diorama shows the Lambton Worm rising out of the well for its first meal. Instead of making a more flexible model, I tried building the diorama in as much detail as possible, for example the well with its greenish "cheese pieces" representing the poisoned water, or the head of the Lambton Worm with its gills and red eyes. I think it would make a brilliant lego set because it features a great legend that is sadly still quite unknown.