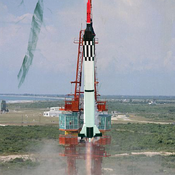 By RocketBricks08
21 comments
10,9,8,7,6,5,4,3,2,1,0.  Blast off! This is a model of the Redstone rocket, which on May 5th, 1961, launched astronaut Alan Shepard on a 15-minute suborbital flight, making him the first American to travel into outer space.  Originally designed as a missile, the Redstone was used as a launch vehicle during the early missions of Project Mercury, America's manned space flight program.  Later Mercury missions utilized the larger and more powerful Atlas rocket, which unlike the Redstone, was capable of launching astronauts on much longer flights that orbited the earth. 2021 marks the 60th anniversary of Alan Shepard's historic launch. This scale model of the Redstone could it perfect for the collection of any space buff or historian who wants to commemorate that exciting day in 1961.
The model is 26 inches tall and is built with 616 pieces. It is 1:45th scale also known as Minifigure scale.