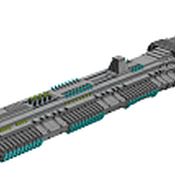 Being interested in Tesla Motors for while now I decided to build several Tesla Motors related creations with LEGO bricks since this is also one of my other main interests*.

One of the latest steps in that regard is/was the creation of the cars from that company. I chose the Model X as the first model because of several challenges like getting the shape and the Falcon Wing doors right. This is a work in progress, but you can see, that I tried to include functions like the Falcon Wing doors and still having a faithful LEGO version of the Tesla Model X.

Why would/should you support this project? Just to name a few examples: You can vote for it, if you are in favour of an official version of this car and/or because you think, that some aspects like the Falcon Wing doors are a cool feature for a LEGO car.

A note about the possible size and price: The current model consists out of 1482 bricks. I don't know, how an official version would look like (and how big&expensive it would be), but you have to keep in mind, that it always is a balance between looks/size and costs.

If you want to see more of this car, I recommend this 360° view, that I recently made (with a different main colour to have some variation):