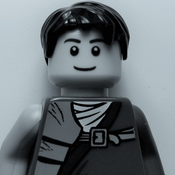 This is one of the most iconic video games, known to us through different platforms such as Nintendo, Sega, Playstation and computer, as well as the cinema screen and now smartphones and tablets.

I hope that it will revive memories of both young and old, so that you vote for this set inspired by a great game whose story has truly made a journey through time.

The scene shows the Prince of Persia and the Guardian of the Dagger of Time as they are passing through a part of the palace, pursued by Sand Creatures.

The first two pictures show some pieces that a set could include, such as clothing, shields and snakes, that would add to the wonderful adventure that this game brings us.