Karl and Russell from Pixar Animation "UP" 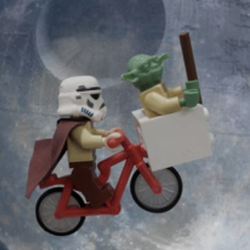 Up is a 2009 American 3D computer-animated film produced by Pixar Animation Studios and released by Walt Disney Pictures.

This story of this film inspired me with confidence to find my dream.

I wanted to express main characters and mini Balloon House of this film with LEGO as a Brick headz' style.

"Adventure is out there~! "