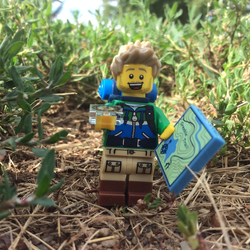 This is a model of the ERCO Ercoupe. The Ercoupe was a low-wing all-metal monoplane built by the Engineering Research Company, or ERCO, in the United States just before World War Two. It was designed to be the safest airplane aerospace engineering could provide at the time, at which it succeeded. It was incapable of spinning out of control and was also one of the easiest planes to fly at the time. Most planes have at the very least a control stick or a yoke, two pedals on the floor for controlling the yaw of the aircraft, a throttle, a multitude of flight instruments, and some planes have even more than that. The Ercoupe had just two simple steering wheels, which could be pushed forward or pulled back to adjust the pitch, and the throttle, with minimal flight instruments. It proved so successful that many flight schools, including those of the U.S. Air Force, bought it, the latter being the likely origin of the paint job I chose here. Perhaps the most notable feature of the Ercoupe was that it was sold in J.C. Penney's, as well as Macy's and Sears. With its impressive safety and simplicity, it was quite possibly the perfect plane to be sold in a department store. It was sold at $2,665 brand new and 5,685 units were sold.

This model of the Ercoupe uses some unusual techniques. I am especially proud of the nose, which features some nifty SNOT building that almost perfectly captures the nose*. I also used similar sideways building techniques to make the shape of the tail just behind the cockpit. Probably the best technique used was in the windshield. I used hinge pieces and translucent 1x2 panels to make the distinctive curvature of the windshield.

At 269 pieces, it would be in the $25-$30 price range, which would be a great price for an airplane of this size. Its physical dimensions are fairly large:

The plane is structurally sound and very "swooshable". As I was working on the bottom of the wings, I rested it on the windshield. I was afraid I had broken it after I pushed down on a piece particularly hard, but lo and behold, it was just fine. The tail looks rather fragile, but you could grip it just in front of the tail wings and use it like a club.

This is my favorite airplane, and I'm sure there are many other people who would enjoy it as well. Whether you own one, or your grandfather owned one, or you saw one at an airshow when you were a kid, it is certainly an amazing machine. I plan to own one some day, and I'd really like to have an official Lego model to go with it. Please scroll back up and hit the support button!