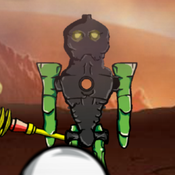 From the depths of the darkest sea, comes a monster unknown to most of humankind. A terrifying creature, known only as The Kraken! This sublime cephalopod measures 32 inches or almost a full meter long. It measures 6 inches (or 15 centimeters) tall and its width is mostly the same (minus the tail).

This set has two rowboats with a small team of pirates to fight off this massive monstrosity.

The magnificent Kraken is made up of several different modular sections that total approximately 2,900 pieces, providing a balance of display ability and play ability.

This product took over a year to develop and was created by a team of two: myself and my best friend, whose LEGO account has the username SkullBuilderX. This product was developed as a complete team effort between the two of us.

As for our inspiration, we have to give thanks to Hamster Productions for making the YouTube video:

One day I showed this to Skully, and after watching it, he suggested we make our own LEGO Kraken, and I said okay, and so we began. Rest assured, no part of the Kraken featured in that YouTube video has been stolen into this one (We're not idiots!).

And so we began designing what would ultimately become the largest project we have ever worked on together. We had the tentacle design down within the first few weeks, and sometimes even we can't believe how long it took to design the body of this behemoth. After many, many, many redesigns, we arrived at a two-piece body: the core and the tail. Originally it would have had a joint in the very middle for articulating, but this proved too difficult to design while keeping the gaps to a minimum. We finished it just in time for Christmas, and here we are.

I think this would be a very welcome addition to the LEGO Ideas collection for several reasons:

This set also has some fun action features built into the belly of the beast as well, featuring:

The Kraken has a lot of potential when diving into the LEGO dimension. Obviously the tentacles are the most important part since that is the only part most people see before they're dragged down to the depths, but the body of the Kraken should not be ignored. This design presents a fully displayable and fully playable model, while also allowing for one of the most well-known dynamic scenes featured in the seven seas.