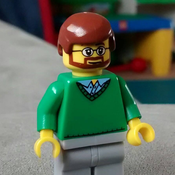 With such high praise comes this LEGO Ideas proposal for Buster Keaton's unforgettable train. The set uses LEGO set #10194 as a foundation, although the final product should look even closer to The General. To hearken back to the silent film era, the proposed set requires only black and gray pieces. The train contains three main components: the engine, the wood car, and the iconic cannon, complete with cannonballs, a broom, and a barrel of gunpowder.

For ultimate playability, the set includes a deadpan Buster Keaton minifigure to enjoy every memorable gag from the film, whether it be Keaton standing on the train roof, sticking his head in the cannon, riding on the side rods, or stuck on the cattle catcher.