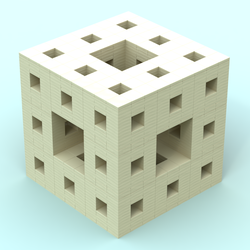 Board games are a big thing. LEGO bricks are (obviously) a big thing. Many of us enjoy both. But there are no LEGO board games for older enthusiasts, existing LEGO games are mainly targeted for younger audience. With Santorini I'd like to change things and offer a "serious" alternative.

Santorini, designed by Dr. Gordon Hamilton, has been a big hit after it was republished via Kickstarter with a new fancy look. It's "blocky" by nature, so it fits nicely in LEGO world, too!

In addition to being a great game, it looks good as such, an interseting architectural setting. An imaginative island high above the sea. It includes both traditional bricks and plates and also some Technic structures inside the rocky base to make it sturdy.