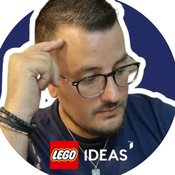 By Airbricks95
103 comments
Created for the fans of the French group Indochine.
This French pop rock group was founded in 1980, I was inspired by their Central Tour scene currently on tour in France the group is composed of:
• Nicola Sirkis - vocals, guitar, keyboards, harmonica,
• oLi dE SaT - rhythm guitar, keyboards,
• Boris Jardel - lead guitar,
• Mr. Marco - bass,
• Ludwig Dahlberg - drums, percussion.
In 2020 Indochine announces a tour in 5 French stadiums, to celebrate the 40 years of existence of the group, called "Central Tour". The Group is particularly known for the following titles: L'aventurier en 1982 J'ai demandé à la lune 2002 Trois nuits par semaine 1985, and many others.
The following Central Tour creation is made up of 2051 pieces and has 5 Minifigures. If you like, thank you for supporting the project.