Check out our Campaign page for more project content

If you are a “Excelsior” Level Fan of the X-Men please consider contacting the X office at Marvel: officex@marvel.com

The single greatest thing that could happen to this project would be a posting on an official Marvel page. So if you really want this to happen, please consider contacting
Marvel comics directly.

We realize that getting a set produced is a long shot, but please consider sharing this project with X-men fans via your facebook and twitter feeds to help us get this project to the review phase and celebrate our love of the X-Men." 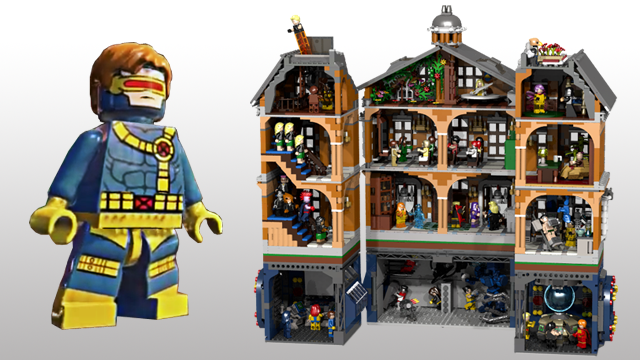 Interior Details.
The intent of this project is to campaign Lego and Marvel to produce a Lego set worthy of representing one of the most famous institutions in the history of Comic Books, the X-Mansion

Like our previous project Assault on Wayne Manor we decided to go with the Lego Modular footprint, but again, with a twist.

When this model is closed in the “storage” it remains a handsome display while taking up a minimum footprint. However, the sides of this modular fold open along a vertical axis creating the distinctive wings to the classic X-mansion.

We will be the first to say that this set is extreme with no less than four stories. Our proposal includes (starting from the bottom left of the image):

Ok, if you were paying attention to the picture above, there are many characters depicted, 45 to be exact. This project will NOT include 45 X-men.

This proposal is first and foremost to produce the X-mansion. Of course, everyone has their favorite cadre of X-men and sadly we will not be able to include them all in a single set.

What we propose is to include a bare handful of critical figures and leave it to Lego, Marvel, and voter feedback to figure out the rest.

Proposed Characters:
Xavier: He is the founder of the school of course. We propose that he be presented in
the levitating chair as depicted.

Beast: Beast is foundational character. Very well liked and his intellect and physicality allows him to server in a variety of display and play roles.

Shadowcat: Another very well liked character that is suitable for a multitude of roles. She is also a critical character in a variety of X-men events. She is also GlenBricker’s (one of the co-creators of this project) favorite X-man.

Gambit: Gambit is a lot of fun. One of the contrarians of this diverse family. He is also DarthKy’s (the other co-creator) favorite X-man.

Mystique: This is fundamentally the home of the X-men. The more blunt foes of the X-men would not be well suited to the concept of the set. Mystique however is an expert of infiltration and suits very well with the premise.

Storm and Cyclops (Not inherently Included): It is hard to imagine the X-mansion without at least one of these character’s being included. When we initially started this project they were both required characters. However it has now been revealed that Lego will be producing these characters. That of course does not mean that they cannot be included. We just no longer feel the need to push for them as they will be in the collective of existing Lego characters, like Wolverine.

The Rest?
It is very hard to assess which other characters should be included or how many at that. For that reason we are leaving the rest up to Lego, Marvel, and You.

When you vote for this project make sure to tell Lego who you want included. Also, we have a poll on our X-Mansion Campaign Page for you to vote for your favorite X-men The highest voted character’s may not get picked but its more data for Lego and Marvel to process.

As for how many will be included, well that is up to you as well. When you support this project, you will be asked how much you would be willing to pay for a set based on this project. Of course, your instinct will be to say $1. Well, if everyone says that the project either won’t get produced, OR we will end up with a set worth $1. To be blunt, the more you are willing to pay for the set, the more content it will include.

Although we are very open as to the exact characters in the final roster, it is important to us that it includes an equal (plus or minus one) number of female and male characters. We know that this will not be difficult to accomplish as the overall roster of X-men characters.

Please note, on our journey to 10,000 supporters we may find the need to change up the proposed roster. We give you our assurance that though we reserve the right to do so, we will only do so with great consideration.

The simple statement “Beak should be in this set.” is bland and lets face it, unconvincing. There have been over 100 “official” X-men since the comic debuted in 1963, and this is ONE SET. So, please, be creative, make a case!

With perhaps the exception of cerebro, there is nothing more iconically associated with the residence of the X-men as the Danger Room.

That is why the Danger Room is the largest element of our design.

This is where the students come to train and hone their skills, an environment that is simultaneously safe and extremely deadly.

Now, as any real fan of the X-men knows, the Danger Room can mimic any environment required to test the mettle of the X-men. Such a task is beyond the scope of even the most expansive Lego set.

Should this reach production we would encourage fans to use their own Lego collections in creating truly diverse environments.

We have however attempted to portray the Danger room in its default state. Metallic walls that are ready to spring traps and obstacles that would challenge even Omega Level mutants.

We have included a variety of classic elements: a combat robot, grappling arms, rods and rings, crushing walls, and dart throwers. Not displayed are also a series of flame throwers and beam weapons.

In addition to this standard “obstacle footprint” the other design innovation we propose is “holographic villains.” We would like the set to include a series of clear 1 x 5 x 6 bricks with prints of classic X-men villains depicted on them. This invokes the holographic nature of the Danger Room while also allowing the set to include references to all of our favorite X-foes while not ramping up the cost of the set. The image above depicts Juggernaut and Magneto versions of these “holographic villains.”

Cuusoo only allows us to show five images in a project. For that reason we will be cycling out the following images over time to showcase various rooms and character concepts. As we cycle through images they will be moved to the campaign page (link later). If you would like to be kept abreast of changes to the project, you can follow us on Twitter or our flickr page

Rooms on the X-Mansion Campaign Page: 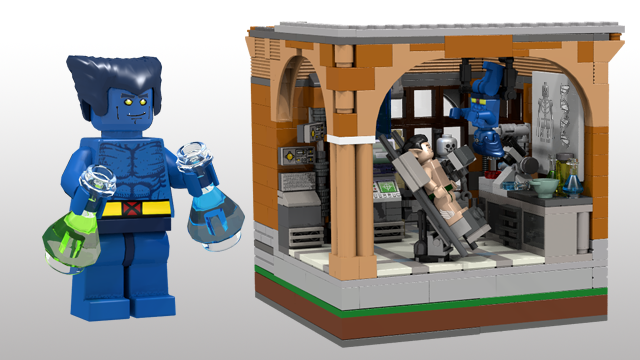 As we all know, a lot of X-men stories eventually require a laboratory, often being operated by Doctor Hank McCoy, The Beast.

We have populated this room with a series of “high tech” panels and a collection of minifig scaled equipment including a microscope. The board on the wall depicts a DNA chain and an “adamantium skeleton with claws” (what could that be?).

A bar hangs down from the ceiling so that the Beast can perform his iconic pose of “sciencing inverted.”

Also central to the room is a posable scanning/recuperation bed with monitors. 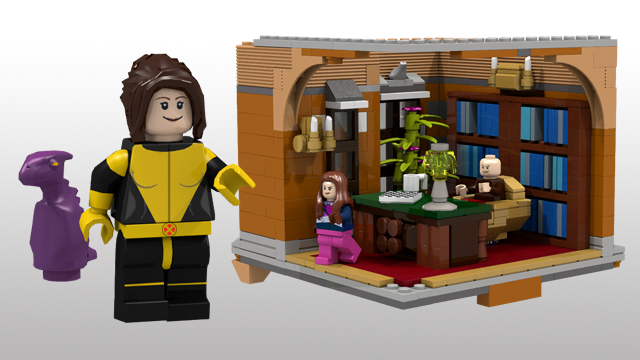 The Headmaster’s (Xavier’s) office includes integrates a bookcase and candle sconces into the walls. Central to the build is a fine well snotted (link to snotted) desk with a lamp, mug, and a “chess set.”

The figure depicted is a proposal for the Shadowcat. As we stated above, she is sporting the iconic Yellow and Black of the X-men. Thus, such a figure could be easily modified to stand in for a multitude of other X-men characters.

*Can We get an over-sized figure Colossus or Juggernaut, like the Lego Hulk?

This type of figure is called a "big-fig" In Lego circles. Such a figure requires the creation of new Lego parts and it therefore not something we can officially request though a Cuusoo project.

There have been been larger Lego sets to be sure but yes, it is very large. The real question is, can the market meet the asking price? Well, that is very hard for us to predict ahead of time.

We are shooting for the moon and seeing what falls out. Maybe we get the whole thing, maybe we get a smaller model, perhaps we just get the Danger Room, maybe we all just get to have fun thinking how cool it would be to have this sucker.

If nothing else, we are showcasing to Lego and Marvel just how big the demand is for these characters.

*Why don't you split this up into a series of sets?

Cuusoo prohibits projects that directly promote a series of sets.

Thank you for taking the time to look at (and hopefully support) our project.

Please "Like" the Rebrick images to help get them out to Lego fans everywhere:

This project is brought to you by DarthKy and Glenbricker

DarthKy specializes in a variety of Brick Built Figures based on popular characters.

Glenbricker also has a variety of projects on Cuusoo including:

The Discworld, Now including Rincewind! Oook!

The Librarian, An Orangutan

There are plenty of other great projects to be found on Cuusoo though. Our favorites include:

Spider-Man: The Symbiote Costume by mmccooey

The Drake's Head Inn by Alexp

BACK TO THE FUTURE TRAIN by Grusso

The Wizard's House by Alexp