Dennis the Menace and Gnasher 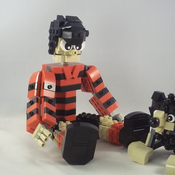 Dennis the Menace and Gnasher are the two main characters in the Beano, which was first published back in 1939. The Beano take the reader around Beano town, that where Dennis and Gnasher live. You're able to find all of  Dennis friends there too.

This project has over 300 lego pieces in, which are mostly black and red. This project would be the equivalent to a lego set, price at 30-50 pounds.

Dennis and Gnasher are both highly poseable, which would make them good for stop motion video. They're poseable is taking advantage of the mixel ball joint, which first came out back in 2014. By having all the ball joint it give them a real life filling. The movement what Dennis has are ; ankle, knee, hip, shoulders, elbows, wrists, fingers and neck.Gnasher also has lots of movement which are ; ankle, hip, wrists, shoulders, neck, mouth and a tail.

Dennis is known in the comic and TV show to be on a skateboard, so why not give him one! The skateboard is made from black and tan bricks. The wheels were made from the inside of the tyre, which is known as the rim. Dennis is known to have a catapult, which he use to shoot water balloons at his next door neighbour called “Water”. The catapult is made from brown brick with a red rubber band as the part you pall. If you want Dennis to be holding the catapult like you see in the comic, It can be clip to the back of him. Dennis also come with a banana, which has a main roll with making people slip over. Gnasher on the other hand come is a bone, which can be easy place in his mouth. The bone is made up of just white parts.