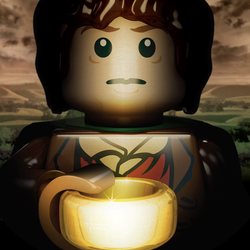 Soon after I got LEGO Dimensions, I had more characters and vehicles than could fit on the toy pad. I searched for a purchasable display base that could store spares, in an easily accessible place, ready for play, but found none.

Lacking the bricks, I decided to build one on LEGO Digital Designer (even though I can't use the model for it's purpose), keeping in with the game's color scheme and making it look as professional as possible, and upload it to LEGO ideas, in the hope that my idea would become a set.

I believe this would make a fun, useful, successful LEGO set. It is appealing to the eye, and makes a way to store your favorite characters in a place that is near to the portal, on display, so you can put them on it without having to dig them out of a storage container.

The gaps at the front and back of the white toy pad case are to display the LEGO symbol on the front, and make room for the cable and keystones at the back. They also function as handholds to take the toy pad out of the case. I included a picture of the base but with a narrower gap, to be more fitting for a story pack, which only have the cable sticking out the back.