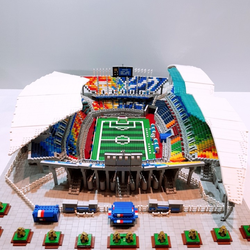 It is the Old Trafford Stadium in Manchester, England. The Manchester United club of the British football league is using it as a home stadium.

The present shape is the result of several expansion works.

It is the stadium of the second Premier League following last Anfield Stadium.

As fans who like football, it is very enjoyable to make famous stadiums small as Lego.

We also upload photos of stadiums in Korea.