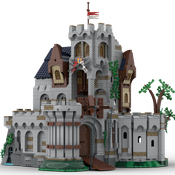 A long, long time ago …
It has been more than a quarter of a century since all the Crusaders Knights left the Kingdom in 1992, summoned by their King to join him and a handful of knights who had earlier set off on the crusade. The royal order did not miss me either - Sir Grzmik, I was 7 years old at the time and was leaving the Kingdom in the company of a friend, my peer Prince Gregory, the eldest of the King's sons, who became the King himself a few months ago. And it was by order of the new King, who wanted to fulfil the prophecy and return to the old Kingdom, that we returned to the old lands with our bravest of knights and a group of architects to prepare them for the return of the King. We only found the ruins of our former fortresses, so it was necessary to build a new seat for the young King from scratch. This is how the new castle was built. According to the prophecy, in order for the young King to return to his former lands, we need to get the support of 10,000 people to restore the splendour of the castles and knights of Lego. So, it depends on you whether the young King can move into the walls of his new castle and rebuild the lost Kingdom …
Help! – Let’s make Lego Castle great again!
About the castle ...
The castle combines the features of a defensive building with those of a residential mansion. Built at the foot of a small rock with a cave containing: a pantry with a source of running water, dungeons, the office of the Chief of the Guard with a secret hiding place on valuables placed under the floor. One gate with a large wooden door and a drawbridge leads to the castle. In the courtyard there is a stable - a resting place for two knightly steeds and a blacksmith's cooker with an anvil and other armoury accessories. The layout of the rooms on the ground floor: there is a round hall and one chamber, a kitchen with an oven from where there is a passage to the pantry and other rooms in the cave. By stairs at the end of the courtyard you can get to the castle walls and the rooms of the two-storey residence. On the first floor there is a knight's hall with a staircase and a balcony, a small chapel or royal notary's office and a throne room with the King's office, which on sunny days is illuminated by colourful stained-glass windows. On the first floor there are the living quarters of the Royal Family with a small attic. The main defensive element is a four-floor high tower topped with blanks, in which, probably, the studio will be arranged by the royal magician, who knows ...?
The entire building is designed to be 100% playable. By using hinge bricks, we gain access to all rooms without having to dismantle the ceiling elements. Each floor is accessed by stairs or a ladder, while separate entrances with wooden doors, accessible from the other parts of the castle, lead to each chamber. In addition to the main gate, the castle is equipped with two secret passageways, which can be used for both entry and exit. Unwanted visitors from the throne room fall directly into the dungeons through a trap in the floor. Access to the courtyard is provided by a wall opened with a hinge brick. For convenient transport, the castle can be divided into three independent, easy to build sections.
Basic Statistics:
Total Parts: 2997
Total Lots: 590
Dimensions (closed):
Studs – width: 65.1; length: 49.4; height: 53.5
Inches – width: 20.5; length: 15.6; height: 16.9
Centimetres – width: 52.0; length: 39.6; height: 42.8
Dimensions (open):
Studs – width: 91.0; length: 49.4; height: 53.5
Inches – width: 28.7; length: 15.6; height: 16.9
Centimetres – width: 72.8; length: 39.6; height: 42.8