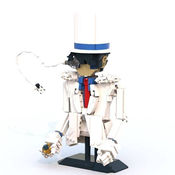 “Look at that! They call this a castle?”
- Sophie Hatter
Dated back in 2004, Howl’s Moving Castle remains one of the most beloved anime films even to this day. The film will also mark its 20th anniversary in 2024, thus it would be great to make a fully motorized model of this iconic steampunk fortress a real LEGO set on the special occasion.
Specifications:
This amazing 1:100 LEGO interpretation of Howl’s iconic Moving Castle includes intricate exterior detailing such as the 3 big triples turrets, the iconic mechanical legs, the mysterious rear door, and the charming micro-city!
What moving castle is complete if it doesn’t actually move? This wicked model also features a motorized system, allowing it to not only move forward but also triggering the movement of its mouth, tongue, bodyside panels, and chimney simultaneously!
The beast tallies at about 2000 pcs, which makes it the perfect display model for your living room!
It could include 5 minifigures: Howl, Sophie, Markl, Calcifer, and the Scarecrow.