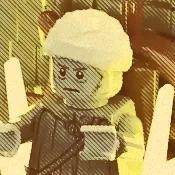 Updated 1/21/2023: Added nameplates! Also switched to some brighter colors for Lovecraft and redesigned Mary Shelley's segment slightly.
Updated 11/8/2022: Big update! I've redone Poe and Lovecraft's colors to bring out some details that were muddy before. I've also redone Poe's bust of Pallas. I completely overhauled Shirley Jackson so that her minifigure is more accurate and so that her vignette is more visually appealing.
Updated 9/24/2022: I've uploaded some higher-resolution pictures to give you a clearer look at the pieces used.
This set of four brick-built dioramas brings to life the imaginations of some of the greatest horror writers in history. Mary Wollstonecraft Shelley, Edgar Allan Poe, Howard Phillips Lovecraft, and Shirley Jackson are commemorated in these vignettes. Display the authors inside their respective scenes, or remove them and allow the scenes to live on their own. This set will make a great display piece for writers, readers, and horror fans in their home, office, or library.
About the Authors:
The scenes are each built on an 8x8 footprint. Each scene places an author in an imaginative scenario inspired by their work:
If you prefer, though, you can display the authors separately and keep the vignettes empty as art pieces!
As of now, there are no new bricks or prints required to produce this set, although several pieces would have to be produced in new colors.
Please consider voting for my project, especially if you love Halloween, scary stories, classic literature, writing, or writers!