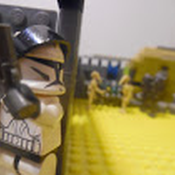 This is the classical tragic Greek Myth of Daedalus and Icarus. I am not going to tell the story here (I'll do that with pictures in an update) but I will say that fortunately or unfortunately (whichever you think) I had to change the story a little bit. Basically I made it so that Icarus survives, so there is no death in this project. You can give your opinion of this change, but it is what it is, for better or worse.

Anyway, this probably took up most of my castle pieces and blue pieces, making it probably my biggest creation ever (that may be surprising, but I don't have very many pieces). I did not invent the method for building the tower; that has been used by other Lego builders many times, but this tower is my own creation. I know the top is not very good, but I was running out of pieces. The tower does have a full spiral staircase that stretches from the bottom door to the top floor opening, so a minifigure could actually get up to the top floor (unlike some other towers I've seen).

The wings Daedalus made for himself and Icarus are made of the claw/wrench piece and the minifigure hand piece. I know the wings use "illegal" methods, but I think they are absolutely necessary to obtain the most realistic feathery wing look possible. The arms made of flexible hose pieces with minifigure hands in the ends. There is a softer and more stretchy version of the flexible hose which I do not have that would allow the arms to move more and actually let them flap their wings.

I apologize for the scatches all over the minifigures; I had to pull them from my gladiator collection. King Minos's sword sheath is 100% possible. It is made by rolling up a cape and wrapping a rubber band around it. It can then attach to the top of minifigure legs in a similar way to the skirt piece.

I will have an update that tells the full (slightly modified) story with pictures. Other than Icarus not dying, it will be as mythologically accurate as possible.