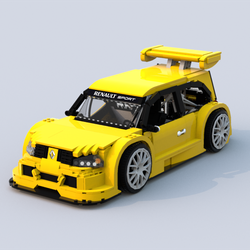 The Renault Sport Megane Trophy is the race version of the street vehicle, which includes a tube frame chassis and a fiberglass body keeping some visual resemblance to the usual mass-production Mégane. It uses a modified Renault Vel Statis V4Y 3.5-liter V6 engine with 325 bhp. The engine, together with Sadev 6-speed gearbox, sits behind the cockpit. It's not street legal and was intended to be used for the Renault Eurocup, but was also used in other races.

I worked on this on and off for several months and had to redesign many areas to finally settle on this masterpiece. Most of the details on this car include opening doors, a removable roof, brake pads, a nicely detailed interior, and fairly accurate looking engine which, despite the picture, is not removable. There is about 1,640 pieces, but that number could be dramatically reduced.

I chose to make this car because it is featured in my favorite racing game and I think this would make a very nice addition to anyone's collection of Lego cars. Please share and support this and feel free to leave a comment to let me know if there's anything I should change or make improvements upon.