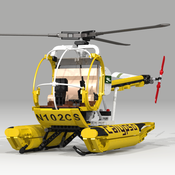 Thank you for taking a look at my LEGO interpretation of surely one very iconic helicopter. The Hughes 269b/300 from the ship Calypso captained by, of course, Jacques-Yves Cousteau.
This helicopter consists of just under 1500 pieces. It has a LEGO flat 4 engine that is linked to both the rotor assemblies through a pulley wheel and belt system just like the real one. Although I could not find and place LEGO elastic bands on the pulleys in LDD. I have built that part in real bricks with proper LEGO bands and it does work nicely.
This is built in roughly 1:11 scale with all dimensions quite accurate to the real one, the model includes dampened landing gear and even a correctly tilted engine that ‘hangs’ from the chassis.
There are a few areas that I may revisit and update if there is time, mostly hidden, out of the way connections, such as the connections of the floats to the landing gear.
I am collecting all parts needed for the real build so if you are interested please stay tuned for the finished real life version (if time and support permits)
I have also been building parts of the helicopter as I go to test structural integrity. Although it is quite a ‘skeletal’ helicopter, it seems to be quite robust. Although it would be more suited to a display model, and not really intended for flying around and landing in the bath tub or fishpond. But only the final real build will confirm!
The floats are detachable as is the green 2x4 tiles on the fuel tanks, so one could also display it as just a Hughes (or modern day Schweizer 300c) helicopter.
Built in LDD, rendered with POV-Ray with custom digital stickers applied.
Hope you enjoy
Derek