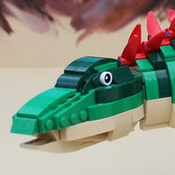 A long time ago, in a land before Ninjago or Nexo Knights, there was the 80's classics period. It was a much simpler time. There were only 7 or so Lego colours, no curved slopes and Technic still had studs.

During this time lived a little boy. Each day when he got up he would play with Lego until well past his bedtime. He would build all kinds of fantastic things. One thing that he really wanted to build was a walking dinosaur. He tried many times to build one but he didn't have the right bricks or the know-how.

Thirty years passed. The little boy was now a man, and one day the man became a father. With his son’s encouragement, he rediscovered the joy of building with Lego. Times had changed, new sets have many new different colours and pieces came in all kinds of odd shapes. He discovered the online communities of other Lego fans and the world of My Own Creations. He began building again, learning new techniques and sharing his builds with others.

One day he saw a video of Theo Jansen's Strandbeests and a spark went off in his head. He thought to himself, " I wonder if I could build one out of Lego and then turn it into a walking dinosaur". And that’s just what he did. Finally after thirty years the man built the thing the little boy always dreamed of.

Now that little boy wants to share it with you.

Thank you in advance for your support.
Dan