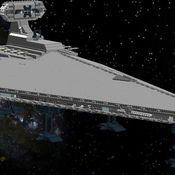 The Battle of Bilbringi took place in 9 ABY between the Imperial forces under Grand Admiral Thrawn and the combined forces of New Republic military and the Smugglers' Alliance. It was the second engagement at Bilbringi fought between the two sides during the Galactic Civil War. The battle was fought at the Imperial shipyards for the sole reason that both the New Republic and Smuggler's Alliance desired to capture a crystal gravfield trap (CGT), a device that would allow the New Republic to uncover the location of cloaked asteroids that Thrawn had set in orbit over Coruscant.

A consummate strategist, Grand Admiral Thrawn accurately predicted the New Republic assault fleet would target Bilbringi, while a concurrent New Republic attack on the Imperial Ubiqtorate base on Tangrene would be a feint.

Despite Grand Admiral Thrawn's genius, the Imperial fleet was defeated when Thrawn's bodyguard, a Noghri named Rukh, assassinated him aboard the bridge of the Chimaera at the height of the battle. As Captain Pellaeon read aloud an incoming report from Wayland that indicated that Thrawn's cloning facility was under attack, Rukh temporarily incapacitated the Captain by hitting him on the neck. Rukh then stabbed his long assassin's knife into the back of Thrawn's command chair, pinning and killing the Grand Admiral.