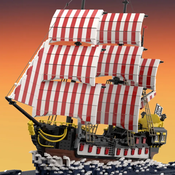 Resting a few miles up stream from where the old LEGOREDO fort once stood, is an old saw mill...
It has had a long history having been constructed nearly 100 years ago, but even with the introduction of electricity and the automobile, it is still operational. Many locals claim that the lumber that was milled here was used to build Fort LEGOREDO and Gold City Junction.
About The Model
This building showcases a saw mill that might have been built around the mid 1800s in North America. However, I have depicted the model as taking place during the early twentieth century just as automobiles are starting to become more common. This scene is meant to represent the transitional period between the old ways and the modern era.
The model has a functioning water wheel that not only spins, but also powers the two different style saws inside the mill. The saws are operated by a series of gears and axles within the foundation. There is the possibility to connect a motor and battery to this system if one wanted to power the model on its own.
The first floor is the work area where the saws, tools, and materials are processed. There is a large work area with two entrances on this level. The front opening allows for the pickup truck to load materials for deliveries. The rear grants access to the log ramp and hoist so that the freshly cut trees can be harvested from the creek and brought into the mill to be cut.
The second floor is used as storage for bundles of lumber while doubling as an office and rest space. It has a desk, bookshelf, table to play cards at, and a wood burning stove. Minifigures can travel between both floors via a ladder.
Specs
Pieces: 2998.
Height: 33 cm (13 inches).
Length x Width: 38 cm x 35 cm (15 inches x 14 inches).
Minifigures
Four minifigures help to keep the mill operational. The one with the mustache is Jake Raines and the old man with the beard is Old Man Kirk (Thank you to those who suggested this fun reference to Lego's founder!). The other two aren't named yet. Help me name these figures in the comments!
﻿﻿﻿﻿﻿﻿﻿﻿﻿﻿﻿﻿﻿﻿﻿﻿﻿﻿﻿﻿﻿﻿﻿﻿﻿﻿﻿﻿﻿﻿﻿﻿﻿﻿﻿﻿﻿﻿﻿﻿﻿﻿﻿﻿﻿﻿﻿﻿﻿﻿﻿﻿﻿﻿﻿﻿﻿﻿﻿﻿﻿﻿﻿ Small Details Hidden In The Model:
Hope you like it!