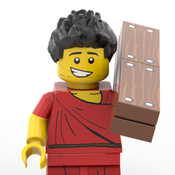 What it is
Veni, Vidi, Vici - That was the slogan that made me addicted to the computer game series "The Settlers" at the end of the 90s. Since then, I've only been settling on my PC for years.
The last great settler experience for me was clearly "The Settlers 4", which appeared in 2001 and tied me back to the computer for hours to build a functioning economy and to fight battles with my little Romans against my girlfriend. The bustle factor and the fun of playing "The Settlers 4" are unbeatable for me until today.
My Ideas set is based on this part of the series. As a big Lego lover and fan of the classic and current medieval knight sets, I have always wanted a suitable set from the settlers on my shelf. So I just made it myself.
It represents one of the most distinctive and important parts of the economic system of the Roman settlers: wood production. The forester plants the trees before the lumberjack cuts them and they are processed into boards in the sawmill. This three buildings are the basis of a functioning system and  the most built.
What it contains
The set consists of three buildings that can be partially modularly put together or taken apart. This means that they can also be presented or played on as single buildings.
The forester's house has an olive-green canopy and a lounge with seedlings and young plants.
The lumberjack finds enough axes and maps in his hut and has the opportunity to take a bath after his work is done.
The sawmill is the largest building and connects the workshop and wood store with a private area for dining. A beautiful workbench and a planer are highlights of the sawmill. The saw worker finds his place to sleep on the upper floor.
The three buildings are connected by a meadow with a large fir tree and the three paths also cross there.
Six minifigures populate the plates. Among them are the three workers (forester, lumberjack and saw worker) and three porters who are supposed to transport the goods. One of them is at work, the other is waiting for orders, while the third is on strike.
A fir, a birch and a tree stump give the minifigures the necessary work and create a wonderful ambience. The environment is rounded off by the typical flowers, mushrooms, bushes, rocks and tree saplings from the game. Two rabbits populate the meadow under the trees.
The main goal was to build it as similar as possible to the buildings in game that a "settler" would recognize it immediately. Many loving details such as the boundary stones, the plants, the rocks, the paths, the rabbits, the minifigures (even an striker) and the trees create an absolute settler atmosphere.
Around 2950 bricks were used for the set.
Quick overview
For me, the settlers and Lego are a perfect match. They combine the element of playing, the cheeky, bustling characters and the idea of creating something through building. For me they are made for each other.
Thank you very much if you support the project and give the set a chance to get onto our shelves.