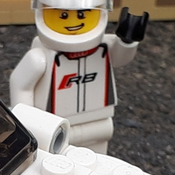 I have admired the beauty of the original car since actually 1987: I was a boy of 12-13 years old, having just switched from comics to car magazines and the very FIRST magazine I bought featured the "normal" Audi Sport quattro, which is already great in itself. As an avid Audi fan, I was amazed und even more when Walter Röhrl drove to his victory at the "Pikes Peak" only a few months later with the last, repainted and biggest version of the former Group B "Flügelmonster" (like we called these cars in Germany).

The car, despite having been build for just one race, became a legend in the following years and decades - when I show people my LEGO version, they all recognise it (when they like cars at all). These reactions were really encouraging in order to make it a LEGO IDEAS project.

So, I very much hope you like what you see!

The main goal clearly was to find the best BALANCE between the different sections, which always includes making sacrificies, also to maintain the SILHOUETTE - that makes it as recognizable as it is.

As you can see, I'm not the best one at generating Lego models per computer, so it is "the real deal" - I built/improved  the car for months and now made the photos in our driveway. (But highest praise for you guys who work magic with your programmes - I'm unworthy in that regard!)

Actually, the car you see above is VERSION 10.0, having started without any stickers but only LEGO parts. I started in in March 2018 without even knowing that LEGO IDEAS existed. I think I will show you the former versions in the updates (if possible / allowed) - the very first ones were quite funny, but had several sections and solutions I kept throughout.

By the way: The more complicated stickers on the car are taken directly from pictures of the 1987 original, also the road sign really is from "Pikes Peak" photos as well. Regarding the sign and especially the stones/rubble underneath, I decided to keep it small and simple - like the original Speed Champions do.

Have fun looking at the pictures and enjoy the translation of a rallye legend into LEGO!

And of course: Please give it plenty of votes and support - and tell all your friends and colleagues and Audi drivers and fans about it, to join us and make it possible to have this beautiful car built for real by LEGO.

Greetings to you all!