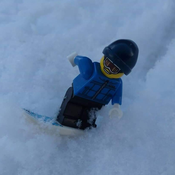 Inspired by the BBC television program, Doctor Who, I have created three of the most iconic monsters from the show. A Cyberman, a Dalek and a Weeping Angel. These are three of the most famous of the Doctor's enemies.

Cybermen: The Cybermen first appeared in Doctor Who in the episode 'The Tenth Planet.' They were humans who, over time, replaced their bodies with metal. They then became one of the most feared monsters in the Doctor Who universe.

Although this model would look better in silver, I have used all grey parts instead, because not all of the pieces used to build the Cyberman can be found in silver.

Dalek: The Daleks were first introduced in the episode fittingly named, 'The Daleks.' They were creatures called Kaleds, which would become unable to move. A scientist called Davros realized that this would happen to the Kaleds, so he created metal cases as transport for them. The new Daleks became merciless war machines that would 'exterminate' anyone that came in their way.

Weeping Angel: The Weeping Angels are one of the scariest 'New Who' Monsters. First introduced in the 10th Doctor episode, 'blink,' they immediately became a fan favourite and in a recent Doctor Who survey, they were voted as the number one scariest Doctor Who monster. They are quantum locked, meaning that when you look at them, they can't move, but when you look away, they can move extremely quickly. They feed off time energy. If they touch you, you'll be sent back in time the potential amount of years that you would've lived and they feed off of the time you never lived.

The Weeping Angel's face is built in the same way as the Cyberman's, but I couldn't find a piece to resemble an open mouth to make the scary face that the angels have.

Please support this project, because I think it has the potential to become a great Lego set and I think that a lot of people would love to own this set, or at least own some Doctor Who monsters as display or play figures. If this project reaches 1,000 subscribers or more and I see that people like this idea, then I might make another buildable figures project for the Doctor.