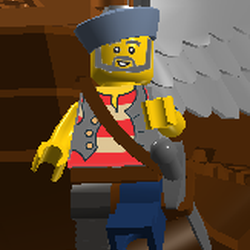 I've been designing sets around a proposed Pond-based fantasy theme for the past few months, and this is my center piece project for the good guys' side: The Toadstool Tower. Other sets in this theme feature knights and castle folk riding over-sized pond/garden critters, so I thought a castle structure based on mushrooms would fit right in.

I'm happy with the final result, as I think it makes good use of a reasonable amount of parts and space. The count is a little over 800 pieces (previous Lego Castles have typically been between 750-1000, and almost all retailed for $99.99). I think the base is something like 16x40 studs.

The building is designed to look like it's either built on a small, rocky island, or that it has a moat. Use your imagination! Upon the rock, the Defenders of the Kingdom have built fortifications around giant mushrooms, making use of them as watchtowers. The castle features a wall with a gate, a prison cell, and a draw bridge, as well as the main keep. This is designed without a back to increase the play functions and access to the multi-layered interior. It features a basement room with a potions lab, an armory for the warriors, a throne room for King Anura (and his pet frog), and a parapet on top of the highest mushroom.

Additionally, I built two dragonflies for some fantasy riders to swoop around on and defend the fortress against any Dark Forest baddies who may show up to rescue their buddy from the prison. These aren't my best animal builds, but they make the point with a relatively low part count. One could be recolored to represent the Dark Forest guys.

Anyway, I had plenty of fun designing this and the other 3 sets in this theme, and I hope you like it too! I know castles have been done over and over, but there's never been one quite this fantastical, so I hope it will catch the eye of kids and AFOLs alike.

Thanks so much for your support and I look forward to responding to your comments!