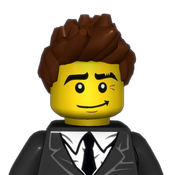 By Youngo
17 comments
This is my MOC of a red Kawasaki Z750, a.k.a. Z2, made famous by the hit manga series GTO (and the prequel, Shonan Junai Gumi). The motorcycle plays an important role in the story as well as in the life of the protagonist, Onizuka Eikichi.
I was inspired after building the Creator 3-in-1 Superbike (31114), which happened to coincide with me finishing the manga series. The secondary build for 31114 captured the classic bike aesthetics well, but felt a bit lacking in the finish (especially around the rear wheel area). I wanted to see if I can combine the techniques in the primary build (e.g., suspension) and the aesthetic of the secondary build, as well as add a plenty of my own details to create something that looked more realistic.
LEGO has done a lot of real-life vehicles lately, including a Harley. However, a lot of people may be happy to see a non-chopper, relatively-lightweight aesthetic of classic ‘70s bikes (like this one or Honda CBX). This is also at a much smaller scale than the Harley/other licensed vehicle sets, and could be much more affordable/accessible.