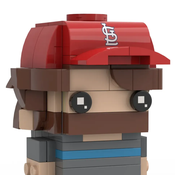 Step right up, step right up! For one ticket, you can face your fears against the Giant Octopus, King of the Ocean! Charge into battle on the mount of your choice and fight as he grasps you in his tentacles and swings you into the air. Don't let your bravery falter! If you are successful, then stop by the food stand on your way out and pick yourself up some calamari made from the beast you have just conquered.
Overview
This is an octopus-shaped amusement park swing ride. This set contains a little over 1,100 pieces and includes the ride, a ticket booth, and a calamari/drink food stand.
Set Features
Not many minifigures are not included in these pictures, however, the selection of minifigures would include a few park-goers, a ride operator, a ticket booth worker, and a food stand worker.
Additional Info
There have been many bigger LEGO amusement park ride sets in the past, like the Carousel and the various Ferris Wheels and Roller Coasters. There have also been some smaller ride sets. However, there has not been a larger-scale swing ride set. I think that the unique look of this octopus-shaped swing ride would make a great addition to the many amusement park-themed sets and would look great in a LEGO city, on a collector's shelf, or in a child's imagination.