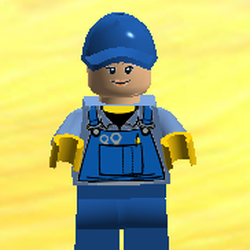 This is my fourth and most ambitious project so far.  I wanted to design a Le Mans type sports racing car with an enclosed cockpit.  This proved to be exceptionally difficult as it was necessary to construct the windscreen using a number of bricks to get something like the required shape.  I feel I have achieved this within the confines of what is available and possible in Lego.  Having said that the windscreen is very much a compromise and, speaking honestly, far from ideal being much too deep from front to back.

The design features opening gull wing doors and removable engine cover and front bodywork.  This model is based on my earlier project 'Sports Racing Car' but with modifications to move the side radiators further back (to accommodate the doors), lowering the exhausts and lengthening the rear bodywork a la Le Mans sports prototypes.  I have also lowered the front suspension in order to fit lower front bodywork.

As can be seen from the accompanying photographs I have also played about with different colour schemes.  Apparently some people were not too keen on the purple used on 'Sports Racing Car' and so I have modified this but have also tried some other versions.  I would welcome feedback and or other suggestions on this point.