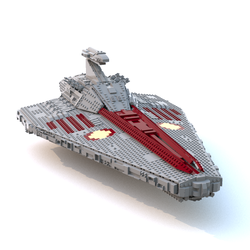 This is the Umbaran MHC (Mobile Heavy Cannon) from the Star Wars the Clone Wars series. This model has 6 legs, 2 anti-personnel blasters, a large cannon on top and roughly 3500 pieces. It has space for one occupant in the cockpit. It also comes with a stand to hold the model up and comes with a display card. This could be an Ultimate Collector Series set, as it is much bigger than the first Lego model released. As for minifigures, I was thinking that this could include one Umbaran soldier, and maybe a couple of 501st clone troopers such as Arc Trooper Fives and a normal trooper (to add some new figures to Lego's inventory). For stickers, this set would include the display sticker of course, and also two Confederacy of Independent Systems stickers (the white hexagon shape on the sides). The Umbaran MHC is a great set because it focuses on building techniques with angles and lots of hinge plates, while still maintaining a strong structure underneath each curve and around every angle. A set like this could definitely expand the building abilities and possibilities of many aspiring Lego creators and designers.