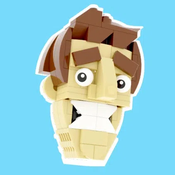 "Never get between a Nazgul and its prey."
This is based on the battle of Osgiliath scene in the Return of the King movie. You can see a ruined watchtower with detachable levels and many places to place a Minifigure for fun and imaginative play. The Fellbeast has fully posable legs, wings, tail, neck, jaw, and a place for a Ringwraith to sit!
In my mind, the Lego Lotr run was the best series of Lego sets. I know I'm not the only one who agrees with me when I say that we want Lego Lotr back. And with enough supports, we can make that wish come true.
This set consists of 924 parts and six Minifigures. From left to right: Gondor Soldier, Faramir, Ringwraith, Gothmog (Lieutenant of Morgul), Gundabad Orc, and a Mordor Orc.
Thank you for your support!
-Beacon Studios
Beacon Studios (YT)