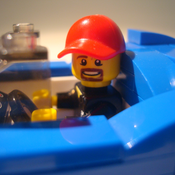 My proposed project includes enough blocks for two complete sports cars.  One in Red and the other in Blue.  You decide which style and body type from a total of 28 different configurations.  Each car is a standard 6 post wide format with about 150 blocks.  The kit requires a total of about 480 blocks.  I have named the cars a SuperGT Panther and Sparrow GT.

Build both a Panther and Sparrow at the same time and you choose which one is Red and which one is Blue and if each is a Coup, Spyder/Targa, Nomad (Sparrow only), or Race Car.  The project would also includes two LEGO Minifig drives, one of which would likely be my Minifig, Marcus Firegone.

I have carefully designed and crafted these two cars to comfortably transport a single LEGO Minifigure.  I have refined these LEGO cars over the past few years.  They don’t reflect any particular production car but they do, in their own way, resemble the ideals of modern day sports cars.  The Panther is a mid-engine supercar inspired design like a Ferrari or Lamborghini.  The Sparrow is a front-engine, rear wheel drive sports car inspired design like a Corvette or Mustang.  Once your Minifig slides into the drivers seat of one of these Marcus Firegone creations there is no turning back.  Built by Minifigs for Minifigs!  Enjoy!

Looking for a BLACK versions of these cars?  Check out my LEGO Sports Car Garage: "https://ideas.lego.com/projects/144069"

The 28 different configurations based on style, body type and colour combinations: