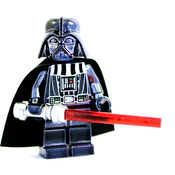 
The sail barge is one of the most iconic vehicles in the Star Wars saga, and one of my personal favorites. It would be a good add to lego's ultimate collector series, mostly due to its size. I realize that lego has already done a sail barge before, but it wasn't as big as this one. Plus, that's the goal of a Ultimate Collector Series set, for example, lego has done a normal Millenium Falcon and a UCS one. And this set would go great with the "Desert Skiff" lego set, coming out this summer, which features the desert skiff and the sarlacc beast. It would come with Jabba the Hutt, Leia, a few monsters, R2D2, C3PO, Han Solo, and maybe Luke, Lando, and Boba Fett, but regarding those I'm not sure, since they are coming out in a set this summer, the one I mencioned before.

The model - it took me a month to build in LDD but it is huge! It's about 1,50 meters long, 75 cm high and 50 cm wide! It has about 4000 bricks. The sides are built with plates, but the front is with ramps. The sails are in actual bricks, instead of fabric, and it even has a gun on the deck.
I haven't built an interior yet, because it's a UCS set, so please comment on wether I should add an interior, and give your suggestions.

Here is a picture with r2d2 on the deck.

Please support, comment, tell people, and may the Force be with you!